When Gazza Told Me To Enjoy My Crisps 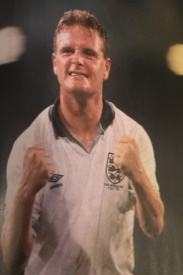 Football can divide so many opinions and only last night I was declaring amongst a crowded table that Bryan Robson was far more superior than Steven Gerrard. I stated their similarities in being hero worshiped by their fans. These abundance of fans came from their powerhouse rival northern clubs.

You have to love the United and Liverpool rivalry. They single handedly carried their fans hopes and expectations on their shoulders with determined performances. My main argument was just how Robbo carried England and Man Utd in the 80’s with his bravery, leadership and goals from midfield.

We argued, agreed to disagree and the night ended with me reminiscing of the late 80s and early 90s about my hero and when I’d regularly say to my Dad with optimism, “Next year United will win the league, won’t they?” It took a while for this dream to come true in regular intervals.

The following day I was feeling tender. The anecdotes from the previous evening seemed a distant memory and not really relevant. I was festering and peckish so decided to venture to the shop in front of my flat for some snacks. As I walked I saw a parked up BMW with some bloke sat in the passenger seat who randomly said, “Alright mate.” I followed suit by responding in the same way.

As I walked past I knew I recognised him and instantly muttered to myself, “That’s Gazza.” Now in this day where celebrities have such kudos I suppose the instant thought would be to grab a selfie and post it to social media. Thankfully I did not have my phone and decided to go over to have a chat.

I’ve been quite vocal to friends and family about my views on Paul Gascoigne. He certainly was a hero of mine growing up. As a 12 year old I shared his iconic tears during Italia 90 when England lost that painful World Cup Semi-Final against West Germany. I was gutted. I was also inconsolable. It occurred to me that I was also missing out on a World Cup Final. 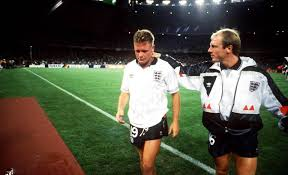 His performances after the World Cup were immense. He took his skill to the next level and was thriving. Gazza loved the big stage and playing Tottenham’s North London rivals was certainly that stage. I still recollect Barry Davies’ commentary from the 1991 FA Cup Semi-Final at Wembley.

“Is Gascoigne going to have a crack? He is you know. Oh I say! Brilliant. That is schoolboys own stuff.”

I can still vividly see Gazza stretching for a ball that was never his to win. There was stunned silence as he rolled in agony. His match was over. His final was over. This resulted in his Tottenham career being over due to his imminent move to Italy. This is when I first heard what a cruciate knee injury was.

He recovered a year later and made his move to Lazio. I became obsessed with Football Italia on a Saturday morning. This was football broadcasting at its finest. The presenter, James Richardson is a total legend and anchored the show with panache. I can still see him sat at that café sipping an expresso or something similar. He would be reading out loud news from the The Gazzetta Dello Sport. Then Gazza would appear at some stage of the show with an amusing sketch. 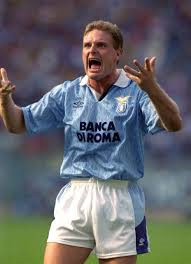 Euro 96 gave us memories of Italia 90. We continued our love affair with football. England were again at the footballing top table and home advantage helped our chances. Gazza was central to our positive performances and again shone when it mattered.

His bleached blonde hair was glowing and we were all cheering. This celebration made reference to the England players alleged drinking during a tour to China before the competition kicked off. It was their way of trying to silence the media. Yes I did attempt to dye my hair blonde (it went Strawberry Blonde though).

I privately sensed that all was not well in the build up to the 1998 World Cup when he looked slow and out of shape. He even had a bandage on his head whilst attempting to play for England in Belgium. I was fuming on that Sunday night when news broke of Hoddle ditching him. You see I had hoped he’d still wear the number 19 shirt in France. I even put him in my England World Cup Team in FIFA 98 as a protest. However, I knew that he was not up to scratch deep down.

The footballing world and my views on him were moving on. His excessive drinking of alcohol was a problem. Constantly being photographed on the lash was irritating. Surely going out with Chris Evans and Rod Stewart was not the best preparation for a World Cup. We all found The Dentist Chair amusing but wanted a change in behaviour. Two years on I wanted results on the football pitch and was not finding these nights out amusing. A World Cup was imminent.

I had moved on from a teenager to a young man in my twenties. I had started to understand the importance of The Beautiful Game. Frustration was setting in with those near misses. I realised Gazza never had the focus to allow his undoubted talent to shine and go to the next level. 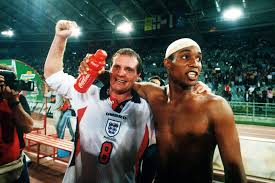 I looked at the new generation and especially David Beckham to offer comparison. Gazza was certainly the first major player in sports tabloid journalism, certainly since George Best. Yes he was front page news from 1990 onwards and seemed everyone wanted a piece of him. However, his exposure was never the same level as that of Beckham’s. I truly believed if Gazza had Beckham’s dedication under extreme media pressure he would have surely been the greatest player ever. He frustrated me immensely.

Later on in my mid to late thirties I enjoyed a superb programme on Sky Sports called The Fantasy Football Club. This programme would ask its former professional players to name their greatest starting eleven. I would get extremely irritated that anyone at Everton would put him in their 1-11. Even if they had only played at least five minutes with him. Being honest he wasn’t great at this stage of his career. I thought ex professional players were jumping on the nostalgic bandwagon.

My love and patience had disappeared for Gazza and I was quite open with this. I stopped reading his autobiography because I thought it was riddled with excuses. It stopped me thinking he was this magnificent talent. I believed he had too many chances to get on the straight and narrow. He had more chances than the person on the street. However, he had just said hello and I had once idolised him. I decided to approach him sat carefree in his car.

“Alright Paul,” I opened up with. “Alright mate, what are you doing?” Was his relaxed reply. You would never have guessed my response,  “I’m just off to buy some crisps.” Haha I am just laughing typing this. He looked baffled, I had baffled Gazza.

I told him he had given me so much pleasure watching him play football throughout my life. Italia 90 came up in conversation. I stated how that influenced me as a twelve year old. I actually thanked him for the memories he created. He replied by telling me that he would be 50 this year.

“I will be 40 in October; you can come to my party if you want,” I blurted out expectantly. Like Gazza needs a few beers with me, my family and friends. He nonchalantly shrugged it off as he did with my request that he sign for my veterans football team. I stated confidently that all he needed to do was stand in the centre circle and pull the strings. He complained about his hips and politely declined.

He asked me what I did for a living. His eyes lit up when I told him I was a PE Teacher. “Aye, my PE Teacher used to let me take the lessons at my school,” was his reply in clear Geordie. There was clearly an air of reminiscing about his younger days. He recalled fondly playing football with his teachers and demonstrated his pride in the numerous victories.

Life on the south coast had captured his heart and was thinking about moving to Westbourne permanently. It sounded surreal just hearing him saying local places. Gazza living in Poole is crazy. He enquired about my school football teams and asked of their progress. I told him we’d lost four finals but reassured me that the kids will love me for giving up my time for them. Gazza was complimenting me.

I decided to quit while I was ahead and shook his hand and left. However, as I left I thought about Bryan Robson and how good he really was? Who better to ask? An ex-team mate and a player he signed for Middlesbrough. I went back to him sat in the car waiting for his friend to reappear.

“Can I just ask? Just how good was Bryan Robson?” I fired at him. “I used to call him dog shit because he got fucking everywhere,” was his instant reply. Furthermore, he confidently exclaimed he was the best player he had played with and against. He commented that he was by far the best player at Middlesbrough in 1998. He stated passionately that Robson should have still played in those days. It struck me just how good Gazza was with his dates as he got his Middlesbrough time scales spot on.

His friend appeared and I knew it was time to go. I went up and shook his hand and said sincerely, “I hope you get better Paul as we care about you.” “Thanks mate that means a lot,” was his response. He then shouted out to me out of his car window.

Haaaaaaaaaa, enjoy your crisps Simon. I forgot exactly when I told him my name as we were chatting for about twenty minutes but he actually remembered. I was relieved I had no phone to hand as I would have had a selfie and just left. It pleased me that we spoke and hope I seemed a genuine bloke. He was sober and certainly held down a decent conversation. Yes he looked thin and had an abundance of tattoos that I didn’t particularly like but he was on good form.

It’s a shame as the next day was Spurs’ final home game at White Hart Lane. I am sure he was invited to this celebration. I like to think he didn’t go because he didn’t want the fuss and exposure that would surely come his way.

On reflection, I suppose my views about him are still there but funnily enough I did not think of them when I spoke to him. I instantly thought of the special memories he created on the football pitch, the memories that I had in my teenage years. It did not occur to me the vast amount of negative press he’s received. I did not care about the frustrations I’ve felt when I read those negative news snippets. He isn’t really front page news anymore.

Maybe I got lucky as he was on good form. It definitely taught me to not believe all you read in the press. I am pleased to have had a chance to have a small chat with him. There was certainly a glint in his eye and he chose to share a few of his stories with me. He certainly was happy to chat and was equally inquisitive of me as I was to him. Gazza disappeared down the road and I went to the Premier Store. I certainly did enjoy my crisps!