The Top 5 Goals Of All Time

Welcome to The Lonely Goalpost Top 5’s, starting off with the top 5 goals of all time.

The Top 5’s is a footballing list where anything can be categorised into a Top 5 category. It’s not definitive and there is no particular order. The list is compiled as the first 5 come into my head of the chosen topic. The Top 5 is there to provoke banter and discussion. We want good fun and no negativity.

If you have any Top 5 topics then do get in touch.

Here’s The Lonely Goalpost’s Top 5 Goals of All Time: 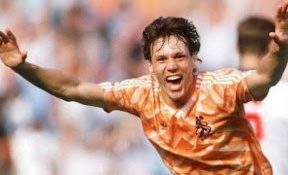 In my infancy as a football fan I admit to not watching this game live. I’m pretty sure I was at my school summer fair trying to win one of those plastic footballs. You know the game with a list of football teams and you buy a ticket with the hopeful expectance of winning a football. I never won once.

Once at home I think this was the first goal I was desperate to see through the recommendation of the commentary.  Whilst watching the end of the match the commentator, John Motson kept eulogising over the goal. Once I got to watch the goal I was in awe as I had never seen a goal like it. A clean volley from the edge of the penalty area parallel to the six yard box. Van Basten had no right to attempt a shot from that acute angle. Instead of controlling the ball Van Basten made contact with the ball clean on the volley to loop it back over the keepers head. The net bulged and there was shock all around the stadium.

His celebration was memorable as his face was beaming with a grin as if to say I told you so or I can’t believe I did that. Well Marco, you did and you did it in the final of the European Championships. This beauty has to rank as one of the greatest of all time. This goal will grace any top 5 goals list out there.

Witnessing Mark Hughes jumping up to shoulder height to volley the ball past the bemused Spanish goalkeeper needs to be seen to be believed. Watching this goal on a compilation if the greatest goals introduced me to the volleying genius that is Mark Hughes. My eyes were not playing tricks on me as he jumped up and volleyed the ball in the goal in an instant flash. This goal needs more exposure and easily makes my top 5 goals.

Mark Hughes had a knack of reading where a ball may fall for the spectacular to happen. He dropped off from the defence as a cross entered the penalty area. As the ball dropped he propelled himself up about six feet in the air to make his body horizontally parallel to the ground. He volleyed in a scissor motion to make the ball fly into the opposite top corner and the ball just rolled down the net.

I had never seen a goal like it in my life. The scissor kick is like sliding for the ball but in mid-air. Mark Hughes made this a speciality of his scored many like it. This unique skill was something that I was too scared to practice. Maybe it was having vertigo or more likely having coordination issues that prevented me from trying this.

In case you wondered it’s his second goal. You can criticise the English defence and there is the hint they went too easy on Diego. Surely there should have been a tackle that was stereotypically English where Maradona was booted into Row Z of the stadium. He picked the ball up inside his half, produced a turn and off he went.

That shadow in the centre circle is as iconic as his goal. What was it? I always thought it was a spider. Perhaps that distracted Reid, Fenwick and company? Watching it you sensed that he was a threat from over fifty yards from goal. Six or seven players blocking his pathway were not going to be a problem. Looking back there was an air of inevitability that when Maradona picked the ball up that he would score. No one was really surprised.

This goal usually tops any greatest goal lists and has to be in this top 5 goals. Afterwards children from all around the world were scoring “Maradona’s” in school playgrounds buy dancing around all comers. How many players have a goal named after them? 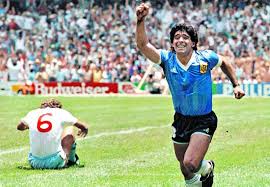 This goal nearly did not make this list due to my sheer stubbornness as I am sure many would have this in their top 5 goals of all time. Maybe, the greatest of all time? However, the goal kept appearing in my mind and having seen it lately it had to be in this list.

All of the previous World Cups had been televised in black and white. This World Cup was the first time you could see the iconic Brazilian yellow shirts. They glowed majestically in the Mexican sunshine. No disrespect to the goals from Garrincha, Pelé or any other goals filmed in black and white but the 1970 World Cup made football radiate in full colour.

This colour added extra flamboyance to the Brazilian team that won the tournament with panache. In the final Brazil were 3-1 up and toying with exhausted Italians as they were 3-1 up. It seemed all of the Brazilian team touched the ball on every blade of grass in the souring heat. There was a hint of classy arrogance as Rivelino, Jairzinho, Pelé and others were walking and waltzing with the ball against the Italians. All socks were rolled down and there was a Samba feel to proceedings. Finally, Pelé nonchalantly rolled the ball to Carlos Alberto to smash the ball into the far left corner.

Both of Maradona’s goals against Belgium could easily make any top 5 goals of all time list. In fact, his first goal combination with Burruchaga can be considered as the greatest pair of outside of the foot moments in football history. Burruchaga flicked the ball precisely through the Belgian defence. His eye of the needle pass with his right foot was flicked in with Maradona’s left foot across the goalkeeper into the left corner.

Maradona’s second goal is the goal added here in my top 5. I often regard this better than the individual brilliance against England. Here Maradona picked the ball up about thirty yards from goal. He had seven Belgian defenders in his way and with some sharp close control Maradona pressed the accelerate button on his left foot to closely control the ball sharply past the static defence to fire home just past the penalty spot. He shot across the goalkeeper off balance and wheeled away in celebration keeping his balance. Sheer pace, power, skill and composure.

What are your top 5 goals of all time? Please comment and join in with the discussion.