On My Head Son – A Headache For Heading 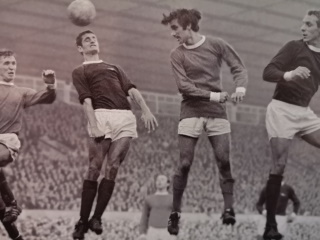 When do you remember first heading a football? And your big brother or sister smacking the ball as hard as they can against your face does not count. They say that football is a ‘funny old game’ and you have to agree.

When you first see a football you instantly want to head it rather than kick it. Heading the ball was always something I enjoyed and in the early days I was more intrigued with those headed goals that were shown time and time again on TV.

An early memory of heading is that of the former Manchester United centre forward Frank Stapleton. He had a presence in the air and scored many brave headers.

Here’s a funny memory that’s just come to me. In October 1986, I think I remember United beating Southampton 4-1 or 5-1 and Stapleton bagged a brace. “I bet Stapleton scored some great headers Dad,” I stated confidently.

I then preceded to throw a tennis ball up high and head it against our shed door, I would commentate for myself in yelling that Stapleton had scored another one. 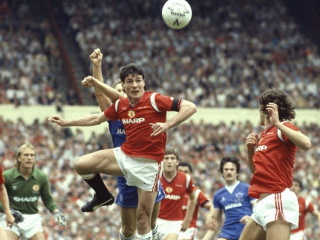 The playground sport of choice at that time was tennis ball football. It seemed that these matches were always a cup final and they mattered greatly. I am sure I spent more time kicking the floor in my school shoes than kicking the tennis ball.

These matches were similar to that of mob football and seemed like they were twenty a side. I used to be a target man in those days and I can still recall scoring a goal with my eye. The celebration was one hand in the air and the other hand covering my eye socket. This pirate celebration never caught on. Having scuffed shoes was a trend that unfortunately caught on to the despair of my Mum.

It was not all plain sailing for Man Utd against Southampton as a month or so later United lost 4-1 away in The Littlewoods (League) Cup. This was the day before the explosions of Bonfire Night.

The explosion was that Big Ron (Atkinson) was sacked as United manager. The shooting star of Alex Ferguson was appointed from Aberdeen. The next 27 years of my life were going to be absolutely fantastic with a glut of trophies.

This match actually was my first ever and although United lost I was awestruck with the players performing. The blue third kit on display was the only part of the performance that was appealing.

I loved watching the keeper, Chris Turner sidestep along the edge of his six yard box keeping warm in the brisk November air. I didn’t like the fact that Matthew Le Tissier and the Wallace brothers tore shreds in the United defence and rattled in the 4 goals.

Stapleton and his headers were nowhere to be seen. I learnt quickly that you don’t win four or five one every time against the same team.

Talking of headers, later on in that season, United were live on BBC One for the Sunday Afternoon match at home against Spurs. I am sure this was in December 1986 but looking back it’s probably my earliest memory of watching a live match at home.

Therefore, it always seemed a treat to watch a match on the box in those days. It was certainly a rare occasion to enjoy the match in the luxuries of my home environment. I wish I could say the same about my Mum’s roast dinner, I can still taste it now (joke Mum).

As mentioned this match is remembered for many reasons. Looking back it’s probably one of the best matches I’ve ever seen. It’s famous for a flying header from the diving Garry Mabbutt of Spurs. Of course I supported United but I actually quite liked the Spurs team of that season. 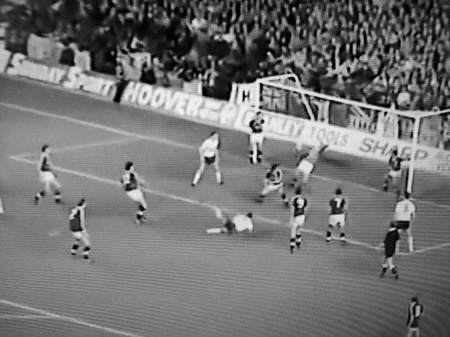 Particularly their experienced keeper Ray Clemence; the mazy winger Chris Waddle; the prolific goal scorer Clive Allen and the flamboyant mastery of Glenn Hoddle. Spurs’ 1986/87 Hummel kit with the arrows across the chest was an iconic kit and in another life I may have supported them.

However, my Dad had instilled United in me and I’m simply delighted that I stuck with them during those turbulent times. The turbulence was they were not guaranteed trophies and success. I liked the early days as there was always the hope rather than the expectation. I am applying that methodology to the United of 2020.

Back in 1986, United raced into a two goal lead but Spurs fought back to lead 3-2. I recall the shock as in those days I thought being two nil up guaranteed a win. Little did I know of the precarious nature of that score line.

In fact Spurs got two goals in consecutive minutes and the first came from Mabbutt. They had a corner which I’m going to say was delivered accurately from Waddle to the penalty spot. Here Mabbutt dived head first to make contact with the ball cleanly whilst horizontal and the ball flew past Chris Turner.

I could not believe my eyes. I’m sure I was diving head first off the sofa, my bed and maybe the top bunk of my brothers’ bed afterwards. Could explain a few things!

Clive Allen put Spurs 3-2 up with an equally brave headed goal. Again I can vividly see the influential menace of Waddle dribbling from side to side. His cross looped up and Allen bravely headed the ball home whilst eating a mouthful of an old football boot from a desperate United defender.

These two headers demonstrated the grace, bravery and intrigue that a header can give a nine year old. I know I was diving around copying the diving header for days and weeks after.

My Mum used to compare me, my two brothers and my sister to that of the three sisters that lived opposite of a similar age. They were pristine and we were muddied urchins similar to some of Fagan’s gang.

She would frantically question “Why can’t you be like the sisters across the road?” It must have been partly my fault with me desperate to dive head the ball like Gary Mabbutt.

The United and Spurs match was not finished and more drama unfolded when United were awarded a last minute penalty and a chance to equalise. Peter Davenport stepped up and calmly side footed the ball to the keepers right.

I was ecstatic and this must have proved to my hysterical Dad that I was a fully-fledged United fan. Little did I know that this was a sign of things to come with United under Fergie (Alex Ferguson).

They would become legendary for scoring an abundance of last minute winners and equalisers through their never say die and committed attitude. Their late goals coined the phrase “Fergie Time” and this late goal in December 1986 may well have been the first ever “Fergie Time” Manchester United goal.

However, the abiding memory of this match was the diving header from Mabbutt and how I was keen to copy it for many weeks after.

Years later when I was able to string more than one touch together I used to practice keepy ups with a football. My party piece was producing consecutive headers in the air.

I still try it now at times and can keep it going for a couple of minutes but I start to feel dizzy. My headed record exceeded 100 (yes I did count my keepy ups, my record here was 1000 and I stopped…honest).

The final footballing party piece in my repertoire involves balancing a football dead on my head seal like. I could actually produce a balanced stop of the ball whilst in mid flow of keepy ups.

It took me the whole summer of 1994 to master this and I practiced every day. This was after watching footage of the flawed master, Diego Maradona. Here, he producing an array of skills that included balancing the ball on his head whilst in mid flow.

This skill never came in useful during my career as a goalkeeper but I enjoyed working on my fancy skills during any warm up. This was more fun than diving around in puddles. 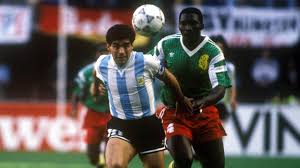 The reason I’m highlighting these headers and my memories of headed skills are because heading the ball is contentious. Recently in the UK heading has been banned in training sessions for children of eleven and under.

I’m not here to discuss the merits and demerits of this important part of football. I am simply recalling the joy I had in learning and watching skills and goals associated with heading the ball.

I’m not suggesting these rules should be revoked but just reminiscing of my heading memories. I appreciate that footballs were lead weights during matches of yester year.

These are days before the 1986 diving heading master class of Gary Mabbutt at Old Trafford. Way before the subsequent days of me diving around the muddied grassy patches of Canford Heath.

I appreciate footballers from the 1970s and before have had a number of serious illnesses since their careers ended and there’s a strong possibility it’s associated with heading. I feel sad about this and support any measures put in place that help the health of future generations of footballers.

If reading this evokes similar memories please add some comments. 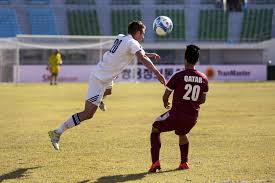